A Glimpse Into The Future Of Electronic Medical Records

Listen to the entire broadcast:

BY LAUREN SILVERMAN
Imagine not having to fill out that new patient form every single time you see a different physician. Or doctors getting automatic notices when a patient is admitted to the emergency room. These are some of the promises of electronic health records.

Before we get to the future of electronic health records, let's remember where we are. Right now, around two-thirds of doctors use electronic medical records to keep track of patients' health - but many of them are unhappy with the technology.

Some of the top complaints: they interfere with or distract from patient interactions, they're too time consuming. 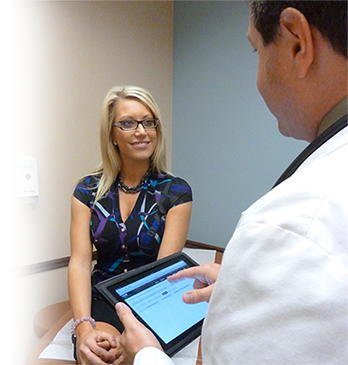 Which is why Abbate created One Touch EMR, a startup that sells an iPad app for managing electronic records.

"We need something that's not only going to speed them up but also maintain that physician patient relationship."

Using a tablet instead of a standard computer to take notes during an exam isn't just for cool points. It makes you more mobile, so that you don't have to have your back turned to a patient or face glued to a large screen.

The tablet also makes it possible to do things like take photographs of problem areas on the patient. And, there's built in voice dictation with a medical dictionary.

There are hundreds of electronic medical record products on the market. Some are customizable and have snazzy features but most don't take us into the future because they still just store patients information...they don't share it.

From Storing To Sharing

The point behind electronic records is not to only store a patient's information, but to be able to share that data securely with the next physician down the line. So that, for example, your primary care doctor can coordinate with the specialist you saw across town.

Travis Broome leads policy and oversight for electronic health at the Centers for Medicaid and Medicare Services in North Texas. He explains that to improve health care, digital record keeping systems all have to talk to each other. Right now, they speak different languages. Starting next year that will change.

Everyone who has a certified product, Broome says, will be able to send records on the same patient.

Broome says doctors will also continue to personalize how they these technologies in their practice. Rather than having a laptop or an iPad, he says, maybe they'll decide to install a big touch-screen on the wall.

"So the patient can see what they're doing," he says. "And it almost becomes an extra engagement because now we can back-and-forth as opposed to the mysterious thing they're doing on a piece of paper or a laptop screen."

That would be a step in the right direction. After all, we want electronic medical records to help doctors, but to benefit patients as well.